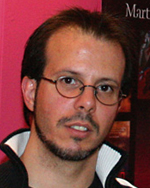 Martin has been drawing and painting most of his life, and made the jump from traditional art to digital art in 2003. He was always drawn to experimenting with different techniques and was able to expand those boundaries with digital technique using Adobe Photoshop software.

His images are a combination of photographic manipulation and digital painting.

He has won over 20 international awards, of which 9 are first prizes in several drawing and digital art contests worldwide, including the award of “Best Comic Book” in the New York Horror Film Festival 2007.

His work has been the subject of a number of solo exhibitions in Argentina, Spain and Andorra and he has participated in more than 25 group and juried exhibitions, including shows in London, Berlin, Los Angeles, Barcelona, Poland, Canada.

Martin has used his skills in all forms of illustration and design in the entertainment, publishing and advertising industry.  His work can be seen on book covers, music CDs, trading cards and Video game DVDs.

He graduated with a Bachelor in Fine Arts in 1999, with a “Degree of National Professor of Drawing and Painting” from the Escuela Nacional de Bellas Artes “Prilidiano Pueyrredón”, a degree that he later re-validated as a Bachelors Degree in Fine Arts in the European Community.

He currently resides in the Principality of Andorra, Europe with his girlfriend Silvia, and works as a freelance illustrator.