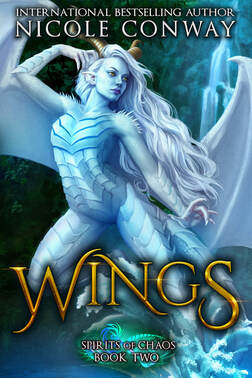 WINGS
Book Two in the SPIRITS OF CHAOS series
The power of the dragon totems is no longer a secret, but it may also be a curse...
​
Koji Owens is not just a superhero anymore. With his fame and reputation spreading around the world, the scaly, lightning-wielding dragon-boy is struggling to keep his Noxius identity hidden as others clamber to discover the source of his incredible power. But while Koji attempts to balance high school and family life with hero-work, enemies are watching waiting for the perfect chance to strike.

The ancient spirits of chaos have waited for eons to claim our world, and renowned historian, Dr. Livingston, will stop at nothing to use the totem scales to open a portal between dimensions that will expose the human universe to the ruthless and powerful Kur. 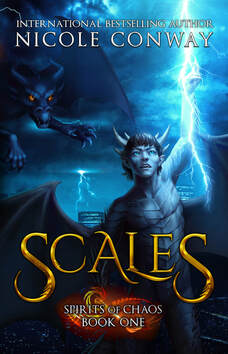 SCALES
Book One in the SPIRITS OF CHAOS series
A comic-obsessed teenage misfit embraces his inner hero in this action-packed adventure that will leave you ready to get your scales on!

"Koji Owens is the new kid … again. As the only son of an Air Force F-16 pilot, he’s learned to adapt and survive every time they move. It’s not easy starting over with new friends and schools every two years, but when the Owens family makes their final move to New York, Koji finally has hope for a normal high school life—that is, until he finds a strange bracelet in his locker.
Transformed into a storm-summoning dragon warrior, Koji finds himself caught up in a world of ancient powers, secret identities, and colossal monsters threatening to destroy his new home. But these awesome powers come with strings attached, and revealing his true identity could mean losing everything he loves. With his family and friends now in mortal danger and New York City in flames, Koji must find the courage to become the hero they need and face down an enemy hiding in plain sight." 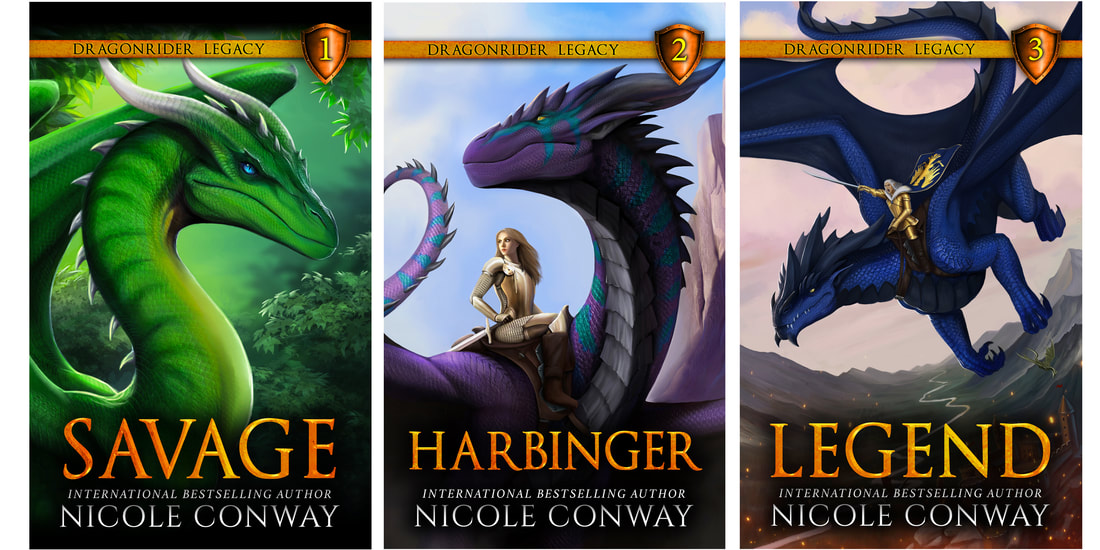 Never send a hero to do a monster’s job.

Forty years have passed since Jaevid Broadfeather brought peace to Maldobar and Luntharda. But that fragile truce will be tested as darkness gathers on the horizon. The vicious armies of the Tibran Empire have crossed the far seas and are threatening to destroy Maldobar completely. Not even the dragonriders can match the Tibran war machines. And after an attempt to awaken Jaevid from his divine sleep fails, the fate of Maldobar is looking grim.

Reigh has never known what it means to be a normal human. Raised amongst the gray elves in the wild jungle of Luntharda, he’s tried everything to fit in. But the dark power within him is bursting at the seams—refusing to be silenced. And while his adoptive father, Kiran, insists this power must be kept secret, Reigh knows he’s running out of time.

As Maldobar burns, the world is desperate for a new hero. Destiny has called, and one boy will rise to answer.

Harbinger is the second book in the Dragonrider Legacy series:

Victory is written in the blood of the brave.As the armies of the Tibran Empire continue to march across Maldobar, a path of scorched destruction and despair is left in their wake. Even with the formidable princess, Jenna Farrow, leading the charge, the strength of the dragonriders is waning. Tibran victory appears inevitable—especially after Princess Jenna and Prince Aubren are taken hostage by the infamous Lord Argonox. Separated from her brother and tortured for information, Princess Jenna refuses to bend to the iron will of Argonox. But her strength and resolve may only last so long. Held prisoner in his dark tower, it would take a miracle to set her free—or perhaps a pair of demigods and their dragons. With revived dragonrider legend, Jaevid Broadfeather, at his side, Reigh must now make a choice: face the truth about the origin of his dark powers, or turn his back on world in need. But throwing off a lifetime of shame and self-doubt is not so easily done—especially when the cost of failure means the destruction of the world. The long-awaited hero has awakened. The ancient spirits are stirring. The dark goddess has chosen her champion. But is he ready to embrace that rite and become the HARBINGER Maldobar needs him to be?

Legend is the third book in the Dragonrider Legacy series: In a war of gods and tyrants, the will of the dragonrider must never falter.


Captured and tortured by the brutal tyrant, Argonox, Reigh's worst fears have now been realized. Argonox has successfully twisted his mysterious dark power for a truly evil purpose--reanimating the long-deceased legendary dragonrider, Beckah Derrick, and her monstrous king drake. But Argonox's cruelty won't end there, and Reigh fears the worst is yet to come. Rescue is unlikely as the Tibrans prepare to make their final strike, poised to break Maldobar's ranks of proud dragonriders once and for all.

With many of its cities already captured by the Tibran Empire, all hope now rests with Jaevid, Princess Jenna, Phillip, and their mismatched band of dragonrider allies to lead the last stand and save their kingdom. Even in such frightful times, Jaevid may find he still has a few old friends ready to take up their weapons and stand at his side again. But facing down Beckah is perhaps the one thing that might break Jaevid's resolve. Can he really strike down the woman he used to love in order to save the kingdom? One final battle will decide the fate of our heroes. Can the strength dragonrider prevail once again? Or will the Tibran Empire become Maldobar's new legacy?

About the Dragonrider Chronicles:

​Book 1: Jaevid Broadfeather has grown up as a wartime refugee, hiding from the world because of his mixed racial heritage. He feels his future is hopeless, until a chance encounter with a wild dragon lands him in Blybrig Academy—a place usually forbidden to anyone but the rich and royal. But Jaevid’s case is special; no dragon has voluntarily chosen a rider in decades, so the proud riders of Blybrig must begrudgingly let him join their brotherhood despite his bloodline.
Book 2: What kind of power is lurking inside him? After a year of training to become a dragonrider, Jaevid Broadfeather has been sent home to rest during a three-month interlude. But when he returns to find the king drake has chosen Beckah Derrick as his new rider, Jaevid realizes something big is about to happen. Every fiber of his being is pushed to the breaking point as Jaevid battles through his avian year, preparing for the final graduation test of the battle scenario. But there is more standing in his way than a few pushups and fancy sword moves. Jaevid must face a new fear as he is tormented by a gruesome nightmare of a mysterious gray elf warrior murdering the royal family of Maldobar.
Book 3: No amount of training has prepared Jaevid Broadfeather for the frontlines of battle. Now facing the true horrors of war, with Luntharda looming on the horizon, Jaevid has begun to question everything he thought about his heritage. The only thing keeping him going is his oath to protect his dragonrider brothers. But in an instant, even that slips through Jaevid’s fingers as he steps from the safety of his dragon’s saddle into the depths of his mother’s wild homeland—the kingdom of the gray elves. Stranded in Luntharda with his partner Lieutenant Jace Rordin, Jaevid must finally confront the demons of his own past as he uncovers the truth about a war that began before he was ever born. Armed with a new appreciation for destiny, and flanked by his trusted friends, Jaevid moves to make the final strike against an enemy that has been hiding in plain sight for far too long. One kingdom’s traitor will become the world’s last hope.
Book 4:  Destiny has called. With Jaevid Broadfeather forever lost to the depths of Luntharda, Felix Farrow struggles to stand on his own. He begins a violent downward spiral which causes him to abandon his post as a dragonrider, hiding in the halls of his family estate. His one hope for redemption lies within the heart of someone from his past—and the very last person he ever wanted to see again.
And now the time has finally come. 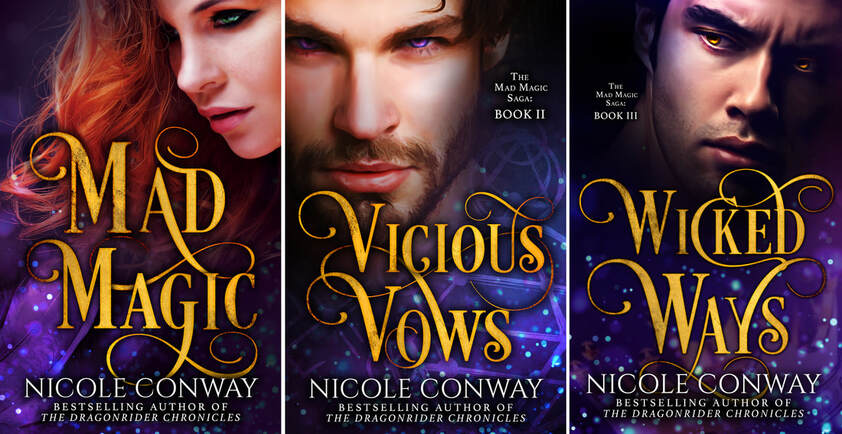 Mad Magic is a beautifully dark and rich Young Adult fantasy from Nicole Conway, bestselling author of the Dragonrider Chronicles.

Josie Barton is a high school student living in terror. Invisible creatures torment her everywhere she goes, constantly getting her into trouble at school, and even haunting her apartment. But just when Josie thinks things couldn't get any worse . . . she meets the guy from across the hall.

Zeph Clemmont is a changeling with enemies in all the worst places, fighting to undo a curse that threatens to end his life. Survival means he will have to swallow his pride and trust Josie with all his darkest secrets.

With the help of a gun-slinging shaman and the enigmatic Prince of Nightmares, Zeph and Josie are only a heartbeat away from defeating one of the most diabolical faerie villains their world has ever known.