​For more than a quarter century I have worked as a designer with startups like Hommage to multinational giants like Samsung, and on products ranging from rubber ducks to gas chromatographs. My creative credo? To make products easier to use and understand by designing them expressively. And, though beauty is a subjective concept, I always care about it. While I always hope my designs will become iconic, the closest I’ve come so far is having a coffee machine, which I designed for Switzerland’s most valuable brand JURA, in the largest German design museum in Munich.

I started my design career working with Pentagram in London and frogdesign in the Black Forest. In 1988, I opened my own design office, now VIEWSDESIGN, located in the Saint Germain des Prés area of Paris, where I work on product, interface and brand design. My friend and partner Lutz Gebhardt runs VIEWSDESIGN Switzerland in Basel.

Simultaneous to my design work, I became an educator at age thirty when I was appointed chairman for product design at Art Center College of Design, on its European campus in Switzerland. After that, I was named Directeur des Diplômes at Strate College in Paris. During the same period, I became professor and department chair at a new Swiss design school, planning and running its product design department. I also taught design management at universities in Solothurn and Zürich, and at the International Management Institute in Lausanne.

Being a teacher is a set of mind, not an occupation, as much as a school is not a house, but individuals sharing knowledge. Design has to explain and to inspire, and in my two decades of working in education I have done the same, trying to enlighten and to stimulate young talents.

Through my engineer father and my arts and crafts teacher mother I was exposed to scientific and artistic influence. Being born in South Africa, and residing in Germany, the United Kingdom, Switzerland, South Korea and California before moving to Paris, France gave me a broad cultural perspective. Picking up languages on the way, I discovered parallels between linguistic and design thinking. Shapes, details and colors are vocabulary, and designing with these elements requires syntax and grammar, and this is how I communicate, by addressing emotions as well as the rational mind.
​
​https://www.youtube.com/watch?v=YMbRy0-lRsk

The episode will debut in Los Angeles, on PBS station KLCS-TV, this Saturday night at 8:00 PM and repeat throughout the week.

It makes it's national debut throughout all the U.S. on Sunday morning at 11:00 AM ET. 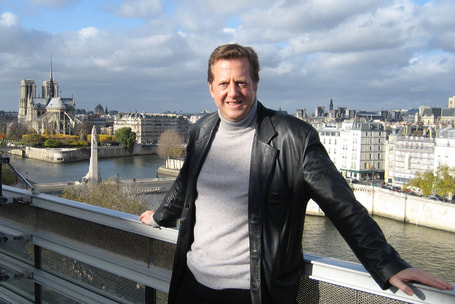